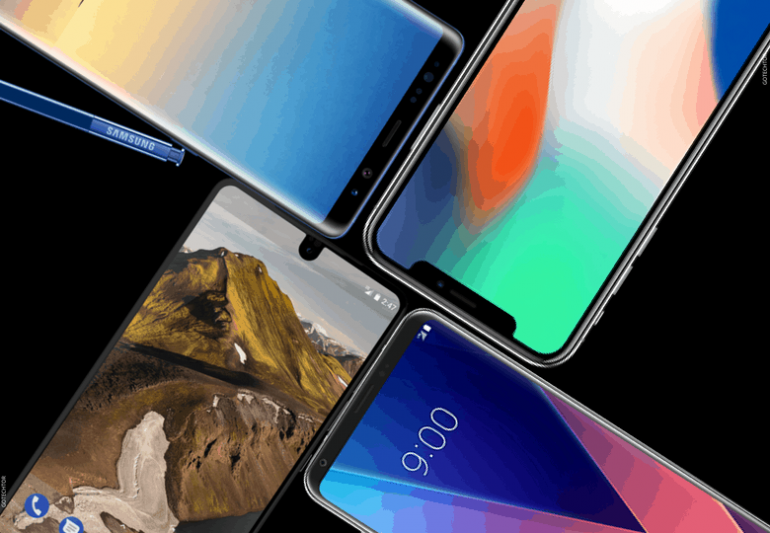 These are the categories we’ll use:

Best smartphone of 2017 ranked by display

The Google Pixel 2 and Google Pixel 2 XL did it again this year. They are the best smartphone camera of 2017, with an overall score of 98 on DxOMark camera ranking (they have the same camera). Thanks to machine learning they take the most accurate photo. The pictures always look incredible in any condition, whether it’s sunlight or low-light performance.

The Essential Phone PH-1 is by far the smartphone with the best design last year. With an edge-to-edge display, a body made of titanium and the rear of ceramic, the phone feels both sturdy and gorgeous. There is no logo on the body and no camera bump. The phone feels flagship and premium in the hands.

The iPhone X won that category by a huge margin. With its A11 Bionic processor, everything feels smooth. You clearly don’t have to worry about apps running in the background. This thing is surprisingly fast.

Most underrated smartphone of 2017

The LG V30 is, unfortunately, the most underrated smartphone released last year. It’s hard to compete against Apple, Samsung. Now Google has joined the party, which makes it even more difficult to have a fair share of the market. And there was also so many excellent phones released last year, the LG V30 was just overshadowed by its competitors.

The Samsung Galaxy Note 8 is the most complete smartphone of 2017. It has everything and everything about this phone is great. It has a big infinity Super AMOLED display, fast/wireless charging, headphone jack, IP68 water-resistant, great processor, super camera, good battery life, and the list goes on. This year Samsung has nailed it with the Note 8.