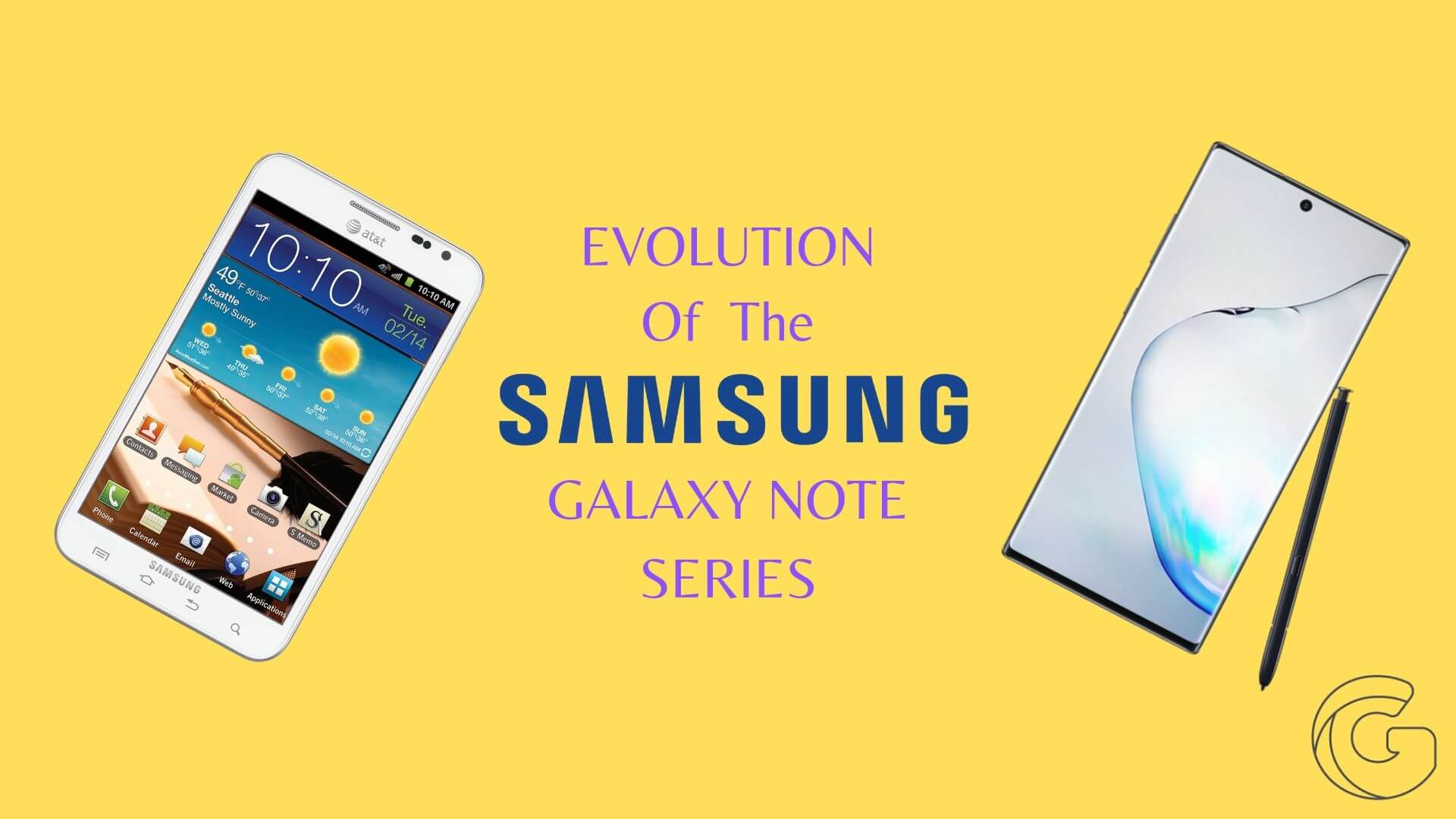 Let's take a look back at the Samsung Galaxy Notes line to see how far the South Korean giant tech has come with one of its most iconic products – and how much has changed.

The Samsung Galaxy Note series is one of the South Korean phone-maker‘s most important smartphones. They’ve started the phablet trend which ultimately became mainstream today.

Back in the days, owning one was an equivalent of subjecting yourself to jokes and mockeries. After all, who wanted to carry around a gigantic device.

As time went by, the Galaxy Note smartphones set the path for smartphone with large screens and became one of Samsung most successful products.

In this article, we will look back at all the Samsung Galaxy Note series the company has introduced since 2011. We’ll see how far they have come and how much has changed since the original model.

Samsung announced the original Galaxy Note at IFA Berlin in 2011. It was extremely large and bulky when compared to other phones on the market at the time. The phone had a gigantic 5.3-inch screen with S Pen, dual-core Exynos processor, 2,500 mAh battery, and an 8MP main camera. It came with 1GB of RAM and 16GB / 32GB of storage expandable storage and had Android 2.3.5 Gingerbread.

In August 2012, Samsung announce the Galaxy SII and released a month later. The phone was even larger than its predecessor; it came with a 5.5-inch screen, a larger 3,100 mAh battery, and is fueled by the Exynos 4412 quad-core processor. The S pen that came with the Note 2 had that special Air view feature that lets you interact with the device without having to touch the display.

On September 4, 2013, Samsung announced the Samsung Galaxy Note 3 and hit the shelves the same month. The huge screen trend didn’t stop with the Note 2. They shipped the Galaxy Note 3 with an even bigger 5.7 Super AMOLED display with1080p. It was powered by the Exynos 5420 octa-core processor and came with 3GB of RAM and 16GB / 32GB / 64GB of expandable storage. There was a 3,200 mAh battery and a 13MP main camera. They introduced the notable Air Command feature with the Note 3, which showed 5 different shortcuts that can be used with the S Pen.

On September 3, 2014, at IFA Berlin, Samsung unveiled the Galaxy Note III’s successor, the Galaxy Note 4. The new model has relatively the same design as the Note 3. However, there was a combination of a plastic and a sturdy metal around the frame that gave it the feel of a high-end product. The phone came with a 5.7-inch QHD Super AMOLED display and a 16MP main camera with OIS. There is a Snapdragon 805 quad-core processor inside combined with 3GB of RAM and 32GB of expandable storage. The Note 3 is the Samsung’s first Galaxy Note phone with a fingerprint scanner in the Home button.

Two months later, Samsung unveiled the Samsung Galaxy Note Edge, a variant of the Galaxy Note 4. The phone came with a curved edge 5.6-inch QHD+ Super AMOLED display that added new functionalities. The curved screen allows users to display news, application shortcuts, etc. It has a smaller 3,000 mAh battery because of the edge that took up some real estate space. Basically, the Note Edge was a Galaxy Note 4 with the edged screen, which became a standard feature among Samsung flagship smartphones.

Samsung introduced the Galaxy Note 5 in August 2015 with a new glass sandwich design that made it feels premium. The device came with a 5.7-inch QHD Super AMOLED display and a 16MP main camera. The phone packed Samsung’s Exynos 7420 octa-core processor and came with 4GB of RAM and 32GB / 64GB of non-expandable storage. The Note 5 is powered by a non-removable 3,000 mAh battery that’s smaller than the battery found in last year’s Note 4. The performance was technically the same, though.

In August 2016, Samsung introduced the Galaxy Note 7, which was a total disaster for the South Korean giant tech. The Galaxy Note 7 packed the Samsung Exynos 8890 64-bit octa-core processor and featured 4GB of RAM and 64GB of expandable storage. The phone came with a dual-curved 5.7-inch QHD Super AMOLED display with support to HDR video, a 12MP main camera, and a 3,500mAh battery. Besides the fingerprint scanner, the phone had iris scanner as a second biometric security measure. The phone had severe battery issues that became a safety hazard. Samsung had to stop its production around the world because of explosion.

Samsung couldn’t let the fiasco of the Note 7 tarnish the Note line’s reputation. With that in mind the company released the Samsung Galaxy Note Fan in July 2017, as a variant of the Note 7. Samsung used unopened and unused parts of the recalled Note 7 to build the new device, but with a smaller 3,200 mAh battery enhanced with multiple safety designs, according to the company. They finally got rid of the front logo that sits below the earpiece.

In August 2017, Samsung unveiled the Samsung Galaxy Note 8 with a gorgeous 6.3-inch QHD+ Super AMOLED dual-curved edge-to-edge display. The phone packed the Snapdragon 835 processor paired with 6GB of RAM and 64GB / 128GB / 256GB of storage. Because of the removal of the home button, they moved the fingerprint scanner to the back right next to the camera setup. There is a 3,300mAh battery inside that supports Quick Charge 2.0 fast charging and wireless charging. In terms of camera, the Note 8 was Samsung’s first Note smartphone to have a dual-camera setup on the back.

On August 9, 2018, Samsung introduced the Galaxy Note 9. It shares the Galaxy Note 8 design, and uses the same camera setup of the Samsung Galaxy S9 Plus. It also has an 8MP front-facing camera. The new S Pen got a major upgrade. It can work as remote thanks to a supercapacitor that allows it to connect to the device via Bluetooth.

If you love this guide, then please share it on your favorite social media.

Editor’s note: This article will be updated as Samsung continues to release more Galaxy Note phones, so it can always reflect the latest model.