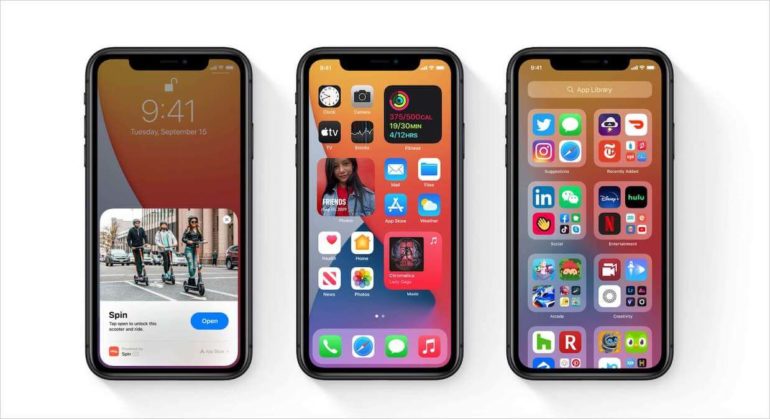 The iOS 14 was a unique arrival for the Apple brand. This was one of the few iOS releases that showed up at a time that did not coincide with a new iPhone model release. So the primary focus of this release was all about the software.

The last few iOS releases were focused on improving system stability. iOS 14 goes beyond that by making some fundamental and notable alterations to the system, including the home screen.

In many respects, it is building upon the improvements brought forth by iOS 13. But interestingly a lot of the new features iOS 14 brings forth provide users the option to try them out or to keep them disabled.

We’ve listed the 9 best iOS 14 features that will take your iPhone to the next level. Click the links below to jump ahead

One aspect of iOS that has been a mainstay since the early incarnation of the iPhone has been the home screen. It has always featured a row based array of app icons matrixed in a grid format.

While you could move these icons around, they couldn’t float on their own. Pure left-aligned, largely unexciting icon positioning was the inherent home screen law.

iOS 14 however, imitated the Android model of introducing home screen app drawers that allow users to sort the app library inside of more sensible, categorical stashes.

Removing apps from the home screen to avoid clutter has become easier. The apps remain on your phone, and you can still find them in category app drawers. This makes the home screen looking cleaner and less clunky.

Clicking on apps now provides a chance to just relegate the app back to the app library, without the need to delete it entirely.

So now you have cleared all the apps you didn’t need from the home screen, what do you do with the empty space? While iOS has largely avoided Android-style widgets on screens in the past, iOS 14 introduces this concept, in a sense.

For the time being, the widgets are standard apple offerings like music, podcasts, calendar, etc. but third party apps are slowly trickling into the selection pool.

The iOS 14 app library similarly sorts apps inside of sensible folders. This makes it easier for users to find particular apps without the need to look for them across multiple app list-out pages.

At this point, the categories are largely self-tuned, deciding where the app belongs in the app library, but improvements in this regard will surely arrive in subsequent releases.

The utility of widget “smart stack toggle” is another key feature of iOS 14, allowing you to toggle through widgets on the home screen without having them occupy the whole of the home screen.

The toggle will cycle through the widgets automatically based on the time of day and what Siri has thus far learned about your typical iPhone usage.

Speaking of Siri, the suggestions from the AI counterpart of the iOS have also improved, with the applicable apps being suggested at appropriate times.

In fact, you can place a Siri recommendation app right on your home screen. It will contain your most commonly used apps, which will be curated based on your usage and even time of day.

In terms of phone calls, iOS 14 brings an interesting change. Instead of taking up your whole screen, or even half of the screen invasively, the calls now come in in a slight bar towards the top of the screen in order to not interrupt your current on-screen activity.

On the messaging front, iOS 14 brings inline replies, which allows to create sub-threads from any message. You are also able to create a chat group and give it a particular name.

Many of the added features have already been introduced in various third-party messaging apps, but they are finally relevant in the iOS world now.

You can now pin up to nine message conversations to the top of your conversation priority listing to promote easy access to the people you want or need to speak to most frequently.

Typing someone’s name also highlights the name of the person you are trying to get the attention of, making the easy specific message in a potential group conversation stand out.

One of the coolest and most useful new features is the capability of picture-in-picture video playback.

This means that instead of occupying the entire window, you can pop the video player out and watch a smaller version of it while working on your device.

You are also able to maneuver and reposition the picture to wherever on the screen is most convenient for you, and even resize it to best suit your screen choice parameters.

Up until this update, Apple users were tethered strictly to the Safari browser, but no more after iOS 14 comes around. In the setting, you can now choose your default browser app to be either the Apple native Safari, Google Chrome, or Firefox.

With emails, besides the native email client provided by Apple traditionally, Gmail, Spark, and several other email clients are now provided as options for the default email client.

Neither of these things should be understated, as this is the first time Apple has reached a proverbial olive branch out to super-user who have been long awaiting the ability to use browsers and emails outside of the confines of Apple-specific products.

While initially there was an error in the iOS 14 where the Safari browser was auto-reset as the default once you reboot your phone, that is no longer a problem. No word on when this type of liberating choice tech will reach out to other aspects of Apple devices, like maps.

Speaking of Maps, iOS 14 has added plotting trails to their maps feature. For instance, you can now track and plan a bike path allowing you to circumvent busy streets, stairs, and difficult areas.

There is also a method of routing your electric vehicles as opposed to traditional ones, plotting a route with charging stations along the way.

One of the best features added with iOS 14 was the Translate app. The app can translate among 11 different languages and turns conversations in any language included.

Just turning your phone to landscape mode and tapping on the blue microphone button is enough to activate the app, then just speak your desired translation phrase, and Translate will quickly analyze and prepare it for you in the language of your choosing.

The best part is that the translations are all private as you don’t even need to have to enable your internet connection on your device to use it.

The Translate app will save some of your most common phrases. It will also enlarge the translated text in case you need to display the phone to a person on the street with who you are trying to communicate.

The app will make suggestions as to what useful features you are most likely to use, and displays the statuses in visual icon form, prioritizing those accessories most needing attention for simple control.

iOS allows the phone to connect to other smart devices around the exterior of the home as well, such as cameras and smart doorbells.

Even more interesting is that based on people tagged in your Photos app, the smart tech can now notify you about who specifically is at your door.

A running thing you may have noticed is the heavy lean by Apple’s iOS 14 into privacy and security.

Accessing the App store now delivers you the information you need to know about what type of data the app collects, allowing you to make an informed decision before downloading it.

There is also a new indicator that appears as a small orange dot if your microphone is in use and a green dot if the camera is being utilized on the device. From the app control center, you can even see if an app has used the microphone or camera recently.

You are also able to now share only your approximate location, not the specific coordinates. This is great for the acquisition of regional news feeds and local new information.

There are a lot of new finds in iOS 14, so while it is largely building on the enhancements of iOS 13, it certainly stands out on its own. If you like iOS 13 more, most of the features that distinguish iOS 14 from it can be toggled off.

While there are still some features to be added, tweaks to be made, and issues to work out, iOS 14 seems like a solid successor of Apple’s iOS platforms.